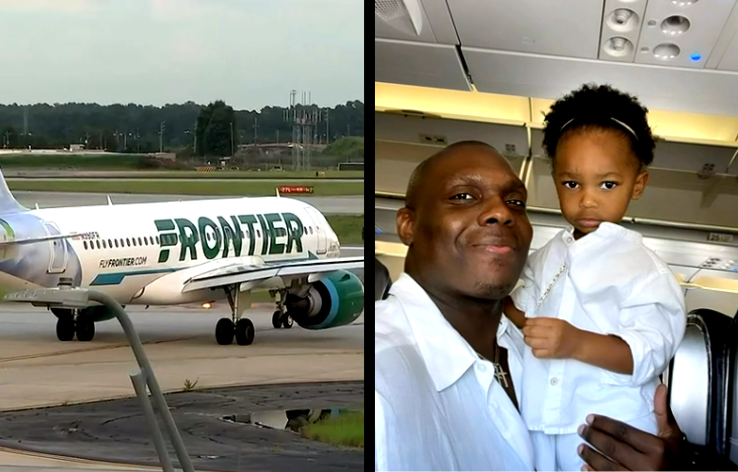 A man decided to share his recent experience with Frontier Airlines with the public after he and his 2-year-old were removed from the flight and he was threatened to be arrested only because his daughter was sitting on his lap. The father had purchased a separate ticket and seat for his minor daughter, but according to him, she was scared of flying and that’s why he had no option left but to let his daughter sit on his lap.

Speaking to WSB, Chrisean Rose explained that he purchased tickets on three airlines this past weekend for a quick trip to Orlando with his two-year-old daughter, Rayana. What should have been a fun father-daughter weekend ended as a complete disaster for Rose and his daughter because they were removed from a Frontier Airlines plane on their flight back home to Atlanta.

Chrisean had purchased a seat for his daughter for every single flight. However, since she was scared of flying, she wanted to sit in his lap. The first flight from Atlanta to Orlando, operated by Spirit, went without issues. Chrisean explained to the flight attendants why his daughter was sitting in his lap even though she had her own seat and they simply allowed him to fly with her in his lap.

But a problem occurred when they boarded their second flight to Orlando, operated by Frontier Airlines. As Chrisean explains, his daughter got into his arms as passengers were still boarding and the plane was expected to depart soon. That’s when one of the flight attendants warned Chrisean that his daughter had to sit in her own seat and that by having her in his lap, they were breaking a federal law.

Rayana reportedly became even more frustrated and nervous, and she refused to sit in her seat, which caused the situation to escalate, despite Chrisean’s efforts to comfort her. After the short confrontation the father had with the flight attendant, he had no options left and was forced off of the plane.

Fortunately, the father and the little girl arrived at their final destination after booking another flight operated by Delta. Per his claims, Delta flight attendants acknowledged the situation the father was in and let Rayana sit with him the entire time.

This incident forced Frontier Airlines to issue a statement regarding the incident, citing FAA requirement:

“It is an FAA requirement that all passengers over the age of 24 months must be buckled into their own seat for takeoff and landing. The parent refused to comply and therefore was asked to exit the aircraft with the child.”

“I will kill my stepson as soon as i get out of the hospital”, man taken into custody after being shot by his stepson, who fired at him in an attempt to save his mother from a beating
The second “Always and Forever” lasted only three weeks: Jennifer Lopez and Ben Affleck are getting separated