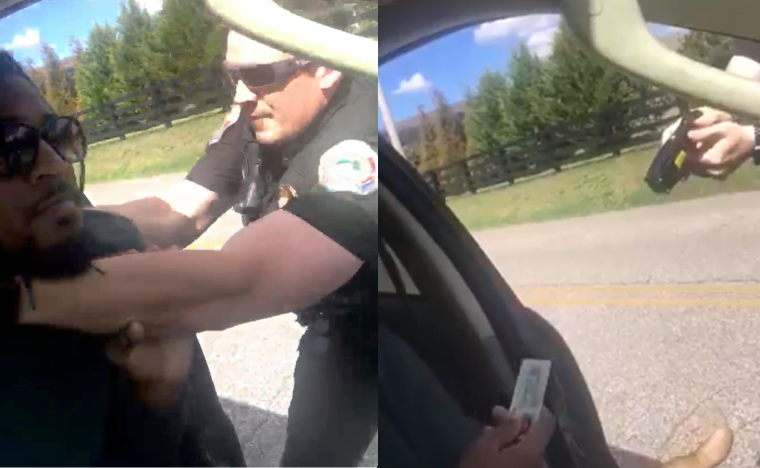 28-year-old Black food delivery driver recently revealed a video of the incident when he was allegedly pulled over for no apparent reason by an officer who eventually hit the man with a stun gun even though the driver had his hands in the air at the time and didn’t pose a threat. According to multiple sources, the police officer is now under investigation after the video shows he didn’t completely follow the procedures.

According to the Independent that reported about this incident late last month, the video shows the 28-year-old D. Gordon, Door Dash delivery driver, speaking to the officer asking him numerous times why he was pulled over. Per Gordon’s attorney claims, Gordon only wanted to have a cordial interaction with the officer because he did not understand why he was pulled over. Gordon started recording the incident once he noticed the situation was becoming more hostile.

The incident reportedly happened in a neighborhood in Tennessee as Gordon was about to reach his final delivery destination. Being just 300 feet from his destination, Gordon passed the police officer who immediately made a U-turn and began following him before he pulled him over. According to Gordon’s attorney, his client was not speeding or breaking any other traffic laws when he was targeted by the officer and that’s why he wanted to know why he was being pulled over.

The beginning of the video shows Gordon on the driving seat with his hands in the air as the officer had his taser leveled at him. While Gordon was briefly explaining to the camera what was going on, the officer is heard yelling at Gordon asking to immediately exit the vehicle. “He said he pulled me over for a traffic stop and he’s going to tase me,” Gordon says. “You can’t do that officer because I called for your supervisor.”

According to the incident report filed by the officer, he claims that Gordon “refused to give his information,” something that was rejected by Gordon backing up his claims with the video in which he is clearly seen holding his driver license in his hands. As the video continues, Gordon is heard asking the officer to call his supervisor as he feels uncomfortable.

“I don’t give a s*** what you feel like,” the officer says as he begins grabbing and yanking Gordon out of the car. “Please don’t touch me,” Gordon says. “Please stop it, why are you being like this? Is this how y’all really are?”

The video continues with the officer continuously trying to forcefully drag Gordon out of the vehicle, while Gordon is asking the officer to stop and not hurt him anymore. The officer asked Gordon again to exit the vehicle, but Gordon once again refused.

“I’m telling you to get out,” the police officer said as he was drawing his taser once again. “And I’m telling you that this is not lawful,” Gordon says, just as the officer shoots him with the taser while Gordon had his hands in the air. Completely shocked and in pain, the video ended showing Gordon finally getting out of the car as the officer requested.

Gordon faces several charges including charges for speeding, disorderly conduct, and resisting arrest. Those charges carry a minimum of 6 months in jail if he is convicted, but his attorney believes his client will be cleared of the charges taking into consideration the content in the video.

Gordon decided to give the cell phone video footage to the Ham. C. District Attorney’s Office and they immediately started an investigation about the incident. The local police department later announced they are also starting their own independent investigation once they became aware of the video. The Ham. C. District Attorney’s Office released the following statement:

“Ham. C. District Attorney General N. Pinkston is asking the HCSO to investigate a traffic stop by the CPD that occurred on March 10, 2022,” the DA’s office said in a statement. “The driver was charged with speeding, disorderly conduct and resisting arrest. No additional information on this incident will be forthcoming until the investigation has been completed.”

NEW: Attorney Ryan Wheeler just held a press conference about the Collegedale PD Traffic Stop that DA Pinkston is asking for an investigation on.

Wheeler’s client, Delane Gordon, who is the Door Dash driver stopped in this video, was standing by his side. pic.twitter.com/LPVZnkJVyy

Extremely healthy young woman with no previous medical history thought experiencing bloating for more than a year was due to her bad eating habits until she was diagnosed with very rare ovarian cancer
“This is going to be fun,” Attorney claims Black elderly woman was taunted, harassed and antagonized before she was brutally arrested by officers causing her to suffer several injuries, lawsuit