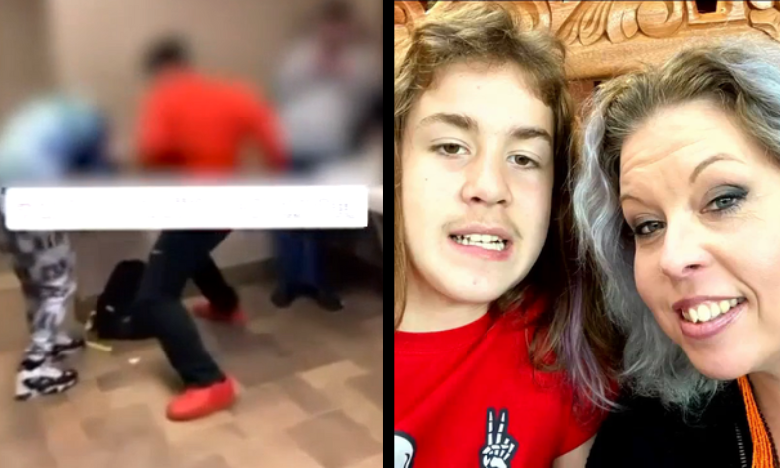 While schools are considered to be safe places for students, fights between students or arguments with teachers are rare incidents that happen from time to time almost everywhere. The teachers and the school officials usually have their own methods in handling these situations in schools, but sometimes even they are unable to prevent everything.

So was the case last week when a student with special needs was attacked by other teenage student in the school restroom between classes and the local community and the parents of other students in the area were devastated when several videos of the beating appeared across several social media networks the very same day.

As per multiple reports, the beating happened last week in Washington. According to N. Vance, the mother of the teenager student identified as Landon, her son was beaten in the school restroom by another student, while several other students were standing around them and some of them were recording the incident instead of helping Landon.

Vance believes that her 9th-grade son was targeted because he has special needs and is on the autism spectrum resulting with limited ability to communicate. While the incident is being investigated by the local authorities and the school district, Vance is still trying to make sense of the violence that her son suffered last week.

“The sound of my son crying, and the hits, it’s literally almost become like PTSD,” said Vance after watching the video of the incident.

Vance learned about the incident when the Graham-Kapowsin High School officials called to say that her son was involved in a fight in one of the school’s bathrooms. She was terrified by the news taking into consideration the fact that Landon is autistic and he has limited ability to communicate with other people. When she arrived there, she was even more shocked when she learned that her son was suspended from school.

The school principal reportedly informed Vance that Landon was suspended because school’s “first goal is often to get both parties out of the school building to help de-escalate the situation. This sometimes means suspending one or both parties while we work to gather further information.” When the school officials learned what happened, he was unsuspended.

“They were more concerned with interrogating my son and using his responses as fodder for his suspension than they were for his physical or mental well-being,” Vance said.

In addition, the principal later said that none of the students reported the fight to the teachers or to the other school officials including the school security officers. The school started to investigate once the teacher noticed something “wasn’t right” with Landon when he returned to class after the beating. In a latter to the parents, the principal said he was “deeply saddened by the video posted on social media,” and he was “disturbed and outraged that this happened at our school.”

Vance decided to speak publicly about the incident in an effort to raise awareness. She added that at least 40 parents and students who have been in similar situation contacted her since her interview went live. A GoFundMe has been set up to help pay for medical expenses.

Following the investigation, the local authorities easily identified the attacker and the case has been referred to a prosecutor. The attacker, a 15-year-old student, was charged with fourth-degree assault and will be arraigned on Feb. 25.

Man fired after filming manager’s racist rant about workers mopping the floor because (they’re) Black in famous fast-food chain
Toddler suffered injuries all over the face while in police care, the mother accuses officers for trying to cover the injuries, lawsuit