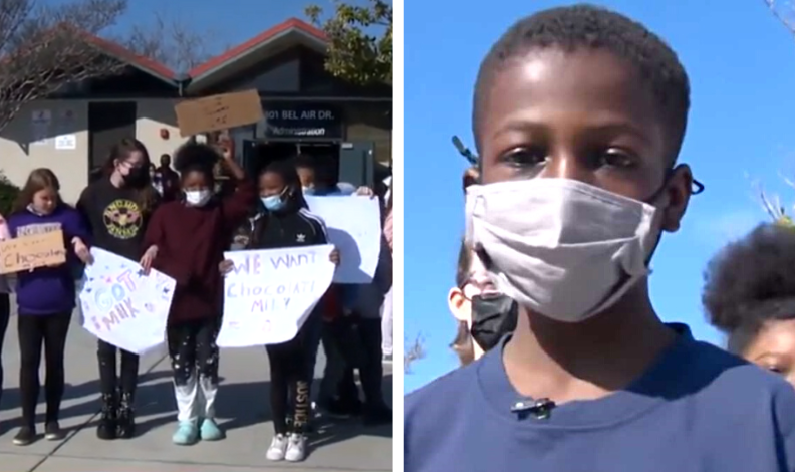 A group of K-9 students led by their 9-year-old classmate decided to raise their voice regarding the school’s decision to remove their favorite food item from the school’s lunch menu. From parents to teachers, everyone was happy to see how the students are fighting together to achieve what they want.

“We used to have it, but then they just took it away.” this is what the 9-year-old Jordan who organized and led the protest told NBC affiliate KCRA-TV earlier this month.

The group of K-9 students has learned first-hand the power of protest in the name of chocolate milk. According to multiple reports, the students staged a protest asking the school officials to reverse their 2020 decision when they removed chocolate milk from the lunch menus at schools across the district.

From what was learned in the protest, it appears that chocolate milk has been one of the most popular items during the student’s lunch break. “You’d be lucky to get a spot for chocolate milk, because it would all be gone,” another sixth-grader who also took part in the protest told the news outlet.

A group of nearly 30 students decided to protest the 2020 school’s decision to remove chocolate milk from the menu and the protest worked. The district chef said the decision to remove chocolate milk came due to high sugar levels in the drink. However, the school district now reversed their initial decision and decided to bring students’ favorite drink on the menu once a week.

“I felt good about it,” Jordan told The Washington Post. “I brought back something that everybody wanted.”

According to People, the idea to stage a protest started when Jordan’s teacher, E. Doss, gave her students an assignment that hit close to home. That day, Doss assigned her class a Scholastic News article titled Should Schools Serve Flavored Milk?, which was about a fourth-grader in Missouri who petitioned to reintroduce strawberry milk at his school.

The lesson had a big impact on Jordan who went home and started preparing for a protest, creating chants like “What do we want? Chocolate milk! When do we want it? Now!”, per the Post. He also made signs reading “We need it please,” “Less regular, more chocolate” and “Justice.”

The very next day the teacher further encouraged her students to make even more signs and present solid argument about their requests once she learned that local reporters had caught wind of the protest. The students took momentum of the situation, left class to protest and went outside the school to gain ever more attention by the public and the school officials.

Their efforts paid off. The district’s director of student nutrition decided to meet with the students to hear their arguments about the whole situation. Speaking in the name of all students, Jordan explained to the nutrition director having only regular in the menu has caused his classmates to drink less milk which further resulted to ingesting fewer nutrients like calcium and vitamin D, and increased waste.

Ultimately, the school officials brought back chocolate milk once a week. Their teacher was happy to see how what should have been a review lesson, ended up as a huge life lesson for these kids.

“Looking back, I wish we would have gotten it sooner…,” Man dies of Covid-19 after struggling to find booster shot, his girlfriend explains
Former two-time UFC heavyweight champion taken into custody for attempted murder