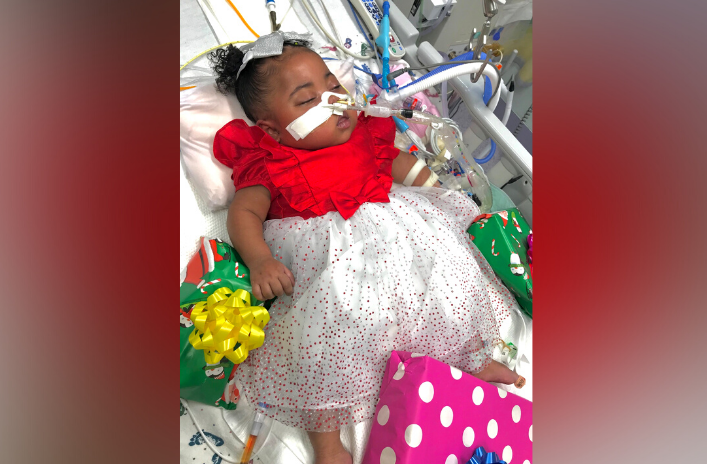 Less than two weeks ago, we reported about the story of a toddler who died during surgery in 2019, an incident that eventually resulted the parents to file a lawsuit against the hospital. According to the recently filed lawsuit that gathered a lot of media attention nationwide, the toddler’s parents claim the senior hospital medical staff didn’t inform them the hospital didn’t have proper staff and equipment to handle the complicated procedure in children which according to them, ended up to be fatal for the little girl.

Fortunately, that was not the case with a 3-year-old toddler who was finally reunited with her mother home after spending almost entire life in hospital undergoing complicated heart surgery, life support, ventilator support and constant intensive care. The toddler was released home earlier this month and her mother is now thankful to everyone who helped her winning the legal battle against the hospital, forcing the facility to continue providing medical care to her baby.

According to NBC DFW, the now 3-year-old Tinslee has been at Cook Children’s Medical Center since 2019 after she was born with a rare heart condition known as Ebstein’s anomaly. In past legal proceedings, officials with Cook Children’s said the condition makes it difficult for her heart to pump properly and causes blood to flow backward through the heart. Her lungs were also underdeveloped, which is common in premature births.

Tinslee was born premature and with a rare heart condition, and medical staff kept her alive through open heart surgery and a ventilator. When the baby was only 10 months old, the hospital ethics committee authorized removal of her life-sustaining treatment. Since then, Tinslee’s mother Trinity has been in a legal battle with the Tx. based hospital as she fought for the right to decide whether her daughter lives or dies.

“I’m sorry but i can’t hold it in any longer today my baby came home and I’m filled with joy and emotions right now. This journey have been nothing but hard and stressful and i am truly blessed i was able to do everything i can to bring her home,” Trinity posted on Facebook early April thanking everyone, including her lawyers, family, anti-abortion advocacy groups and the community, for the help provided during all those years of legal battle. She also referred to the Cook Children’s medical staff, thanking the hospital for ‘supporting her and doing everything they could to help keep her baby’.

According to the doctors at the hospital, the hospital wanted to remove the baby from life support claiming she was in pain and would never recover. In addition, they initially said it went to “extreme” lengths to keep her alive. During most of her stay, the little girl was breathing with the assistance of a ventilator and was sedated but conscious.

Kimberlyn Schwartz is the Director of Media and Communication for Texas Right to Life, a pro-life organization that has been advocating for Tinslee and her family for the past nearly three years.

“It’s just so surreal to be at this point. Whenever we first got her case in 2019, I don’t think any of us knew that it would end in victory like this. We always knew there was a chance this could go south,” Schwartz said. “This shows that whenever fight for life, we can win. I can’t believe that I’ve been so blessed to be part of Tinslee’s life. She is such a fighter, and I can’t wait to see what she does going forward.”

The organization was the one that provided attorneys for Tinslee’s family and confirmed that the toddler now uses a portable ventilator. They also confirmed that Tinslee has appointments with doctors, but also with home healthcare and respiratory therapists which is part of the treatment.

While the advocacy group is happy finally seeing Tinslee home, they say the battle is not over as the organization has been an active opponent to the “10-Day Rule” included in the Texas Advance Directives Act.

While waiting on the hospital bed to receive treatment, woman claimed she caught her doctor watching videos on YouTube learning how to treat her properly, then changed her mind
Elderly woman caught on video calling young Black restaurant worker the N-word several times before slapping him in the face because the restaurant ran out of a menu item she wanted to order