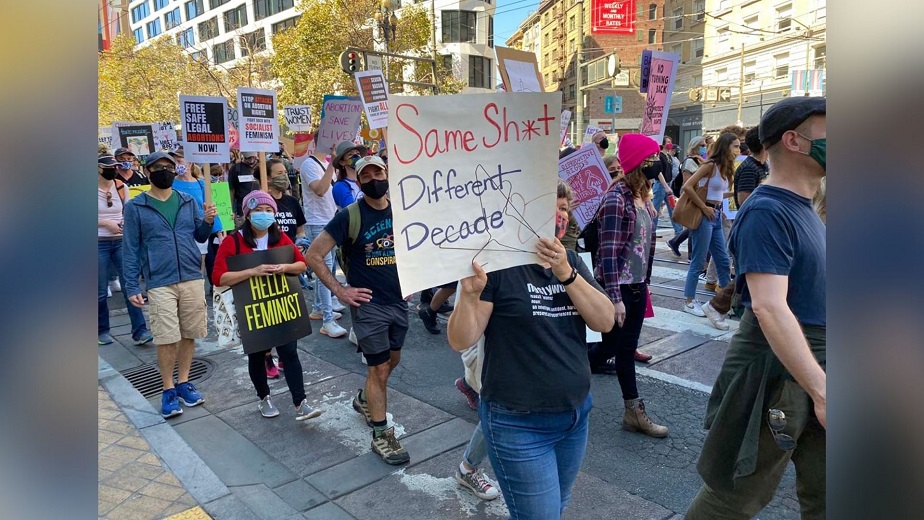 San Francisco, California – During this year’s Women’s March, which was the first organized without former President Donald Trump in office, a large crowd marched from Civic Center to Embarcadero Plaza to advocate for reproductive rights.

For this year’s Women’s March, a promenade of signs calling for female autonomy could be seen going up and down in San Francisco. A group of activists and organizers, including Sophia Andary, co-founder of the Women’s March San Francisco, were among the thousands in attendance.

Those who found themselves in the crowd could attest to the palpable rage that was present. People chanted, waved signs, and hoped to spread a pro-abortion-rights message to the community and beyond — words that strike a particular chord after the passing of Texas’ new, The Handmaid’s Tale-like abortion law.

Having to constantly remind the masses that women should have the right to their own bodies is weighing heavy on some demonstrators, no doubt. However… that’s no reason to stop advocating for women’s rights.

“We’re tired of having to do this over and over again,” a protester said to. “But we got the energy. We’re not going to stop.”

In contrast to Texas’ governor, California’s Newsom recently signed a collection of bills into law designed to protect the privacy of patients and abortion providers.

This year’s Women’s Marches held across the country also come at a time when the Taliban has again seized control of Afghanistan. Women have been banned from attending Kabul University — but the college’s chancellor has said women will still be allowed, though will be segregated. Women protesting the Taliban’s restriction on their rights have been publicly beaten. Alas, the fate of women’s rights in the country remains in limbo.

But with 45 now out of office, at least these marches were held during an administration that’s (much more) in line with female autonomy.