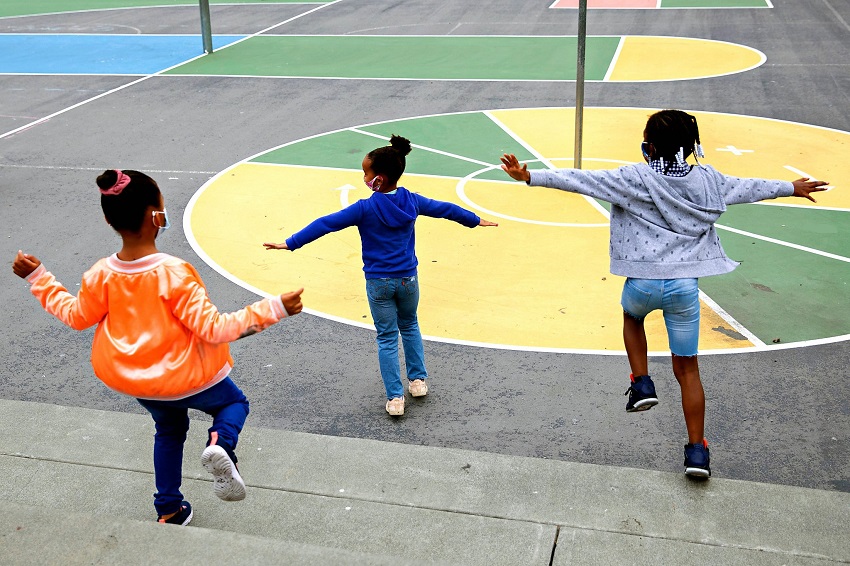 More than a thousand schools in California reopened classrooms this fall with an array of safety measures — face masks, hand sanitizer, distanced desks — to keep kids from spreading the coronavirus. So far, for the most part, educators and experts say, it appears to be working.

But with the virus now spreading so alarmingly that officials are telling people not to gather for Thanksgiving and shutting down classrooms again in places like New York City, reopened schools across the Golden State will be put to the test like never before.

Can they remain safe? The answer likely will determine how millions of K-12 students will be educated through the rest of the pandemic.

Despite growing restrictions to slow the startling wave of new COVID-19 cases, some of the country’s most vigilant public health officials aren’t ready to give up on keeping classrooms open.

“The infections that we’ve identified in schools when they’ve been evaluated were not acquired at schools, they were actually acquired in the community and in the household,” said Robert R. Redfield, director of the Centers for Disease Control and Prevention. “The truth is for kids K through 12, one of the safest places they can be from our perspective is to remain in school.”

Santa Clara County Health Officer Dr. Sara Cody said that “as our cases are rising — and they are rising sharply — we’ll get more reports from schools.”

But like Redfield, Cody sees cases coming into schools from the community, not spreading there. And Cody, who led the Bay Area in the nation’s first lockdown and drew criticism for her slow business reopening pace, is so confident in class safety protocols that she said she’ll continue to approve elementary school reopening waivers.

“If we didn’t feel confident our protocols were going to protect students and staff, we wouldn’t go ahead and encourage opening classrooms,” Cody said. “To date, we’ve seen very, very little transmission in school settings, and hope that continues to be the case.”

This past week, in one of the few detailed looks at the virus in schools around the state, Cody said there have been 216 cases linked to schools out of more than 29,000 to date countywide. Of those, 169 were single cases, and 20 others involved two or more cases.

There were only three outbreaks involving three or more linked cases in students or staff within a two-week period: the largest involved a kindergarten class where five kids — four of them siblings — and a staff member were infected.

Not everyone shares Cody’s confidence. In the past week, New York City Mayor Bill de Blasio announced the country’s largest public school system would again close classrooms for its 1.1 million students and return to remote online instruction as was done during the spring case surge. And in Kentucky, Gov. Andy Beshear announced all public and private schools and universities statewide must close Nov. 23.

Elsewhere, districts in Texas, Utah, Michigan, Georgia, Indiana and other states have temporarily closed schools that had already opened. Others have put plans to reopen classrooms for the first time this academic year on hold.

Dr. George Lemp, an epidemiologist who has been tracking the pandemic in California by age group, said children are underrepresented among cases, suggesting that schools aren’t fueling infections.

Children younger than 18 represent 22.5% of the state’s population but only 12.8% of recent cases, Lemp said. The recent case surge appears to be led more by 18- to 34-year-olds, he said, and by 35- to 49-year-olds to a lesser extent, driven by activities like social gatherings and indoor dining.

“Despite the current surge, it’s still relatively safe for schools to remain open or open up,” Lemp said.

In announcing more restrictions this past week, California health officials made a point of stating that schools that had already opened or were in the process of reopening would not have to close.

Even in the most restrictive purple-tier counties with widespread outbreaks where schools generally must teach remotely online, state officials said elementary schools can still reopen with an approved waiver. All Bay Area counties except San Francisco, San Mateo and Marin now are in that purple tier.

In San Mateo County’s Menlo Park City School District, among the first to bring kids back to classrooms Sept. 8, Superintendent Erik Burmeister said they have had a total of 10 students and staff infected with the virus out of 2,900 preschool-8 students and 380 staff. All were infected outside the schools, and the district shut down four classes for two weeks and didn’t see further spread, he said.

“So far, the data are showing the very strict health and safety measures have resulted in no spread within our district,” Burmeister said. “If that changes, we will move to distance learning.”

In many public schools, teacher unions have forestalled classroom reopening out of concern for their safety. Even before the latest case surge, teachers complained that district provisions for protective equipment, testing and classroom ventilation were inadequate. The latest case spike only amplifies those fears, said California Teachers Association spokeswoman Claudia Briggs.

“The current surge in cases puts an exclamation point on why we have to prioritize putting all the proper safety measures in place in our schools,” Briggs said.

But while parents have been divided over reopening, a growing number are losing patience with the remote “distance learning” that educators agree remains inferior to in-person instruction. Many parents are turning to private schools with open classrooms after seeing friends’ kids thrive there this fall.

Even with case rates soaring in San Jose, Jeannette Guinn pulled her two daughters out of their public elementary school where teaching is online and started them this past week at St. Frances Cabrini where classrooms are open. Guinn said she has to stay in her car when she drops the girls off. They wear masks all day. The kids are kept in a stable cohort and don’t intermingle during the school day. If any has so much as a sniffle, they have to stay home and can’t come back without a negative COVID-19 test.

Likewise, Anne-Marie Kemberling enrolled her daughters at Apostles Lutheran School last week after losing patience with San Jose Unified’s reopening plan and seeing her kindergartener struggle with distance learning. Tuition she said is a financial strain, but she’s comfortable with the virus protections.